This thing is turned off right now, but it may return later...

"Gee, your fur smells terrific."
"Thanks, and your tail smells like a cherry-scented wick." 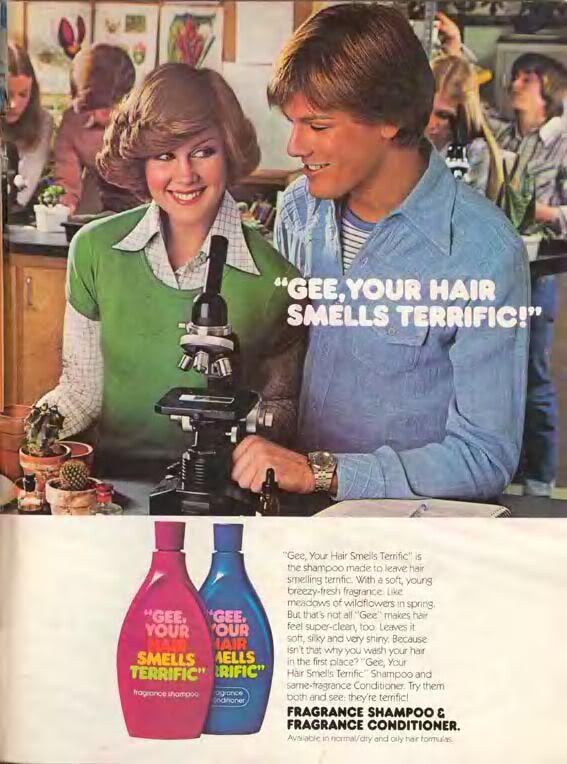 This is a real product that real people really used. I believe it's still made, though no longer in this particular bottle. I came across this ad in a book full of ads from the 1970s (including vintage greatness from Sears, Montgomery Ward and, modeling boots, O. J. Simpson). The 1970s were weird.

What set this apart for me was the odd idea of a spoken phrase for the product's title, something I've only seen done in one other place: Just Great Sponges, which are sold at Dollar General. I was so taken with the idea of Gee, Your Hair Smells Terrific that I sent a picture of the bottles to Kuurion and asked him to make an ad for the Our World equivalent, Gee, Your Fur Smells Terrific, which he was kind enough to do. I have no idea what would happen if you actually said something like that to somebody; probably the response you've come up with above.

You know, looking at this ad again I have no idea what the hell these two are supposed to actually be doing. Are they going to ram a cactus under that microscope for study? The kids in the back row have plants too, so this isn't a fluke. Let's see, gaudy wristwatch, tinctured iodine and yep, that kid in the back is throwing something again... Yeesh. These people grew up to become our parents.

Hah! I just realized that when I change a page that's uploaded, it even changes the one linked via the discussion threads.

Oh yeah, I changed the page slightly. There was a line that was pointed out that didn't make sense. :3

I made a note of that on under the page itself, so that people whose interest in us doesn't bring them this far can still rest assured they aren't going crazy.